October has arrived and it is quite chilly today. As I put on a pair of jeans and a sweater, I warm my hands with a cup of tea.  It’s easy for me to adapt to the feel of fall. The monarch butterfly knows fall is here the same way that we do; they feel the chill in the air. At the same time that the air is cooling, their nectar supply begins to dwindle. To survive, the insect begins migrating to a winter roosting site.

The butterflies from the westernmost parts of Canada overwinter  along the California coast.The majority of North American monarchs travel to sites in the Sierra Madre Oriental Mountains of Mexico.

Butterflies depend on the trees for survival where they cluster together for both warmth and protection from winds and rains.

Temperatures below 55 degrees F make it impossible for them to fly and once the below thermometer drops below 40 degrees they become paralyzed.

When they encounter freezing temperatures they will not live for long.

Late February of this year I traveled to several overwinter sites in California just as the temperatures were warming and the monarchs were beginning spread their wings to consider heading north. The picture on the right is from this trip to Pismo State Beach in San Luis Obispo (estimates populations of about 110,000 butterflies) and Pacific Grove in Monterey (populations of about 45,000). 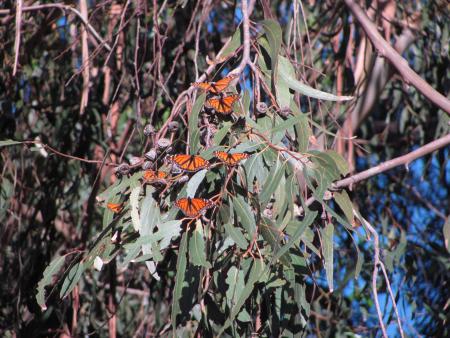 Migrating monarchs begin seeking shelter along the California coast in October. This is not the same generation returning to the eucalyptus trees that I saw in the spring. There have been 3 generations of monarchs since that time, each living about 1 month. The generation that lives the longest is the generation that over winters and then begins the travel north in the spring before stopping to lay eggs. This generation may live up to 9 months!

Later this month I plan to visit family that just recently moved to Alameda, California. There are several overwintering sites right in Alameda, the Ardenwood Regional Preserve and the San Leandro Golf course. The golf course has only a few eucalyptus trees but these will be draped with a population of 25,000 monarchs! It should be spectacular. I find it humorous that my family, having moved from Hawaii in July, has been wearing sweaters all summer and the monarchs are arriving in Alameda to find warmth throughout the winter months.

A fascinating DVD was put out by Nova called The Incredible Journey of the Butterflies. It covers the journey of the monarch from Canada across the United States to overwintering sites in both California and Mexico. You will be amazed at the footage. As the temperatures begin to drop and you retreat indoors, consider cuddling up under a blanket with a cup of tea and watching this fascinating film on the epic migration of the monarch butterfly.